Report from: One Night in Montalcino

Usually if I were to start a story with "two wine writers we're walking down the road" or even "a Canadian and a Norwegian were standing on the street corner" you'd wonder what the punch line was … but this actually happened.

It's true that a Canadian and Norwegian wine writer were starting there 2km trek down to the town of Montalcino when they are stopped by an Italian speaking woman and her companion and through the use of hand gestures and cleaning up the back seat actions are invited into the car to take them into the city. During the drive, which is a short 5 minutes down some windy roads, it is established that the woman owns a winery and is heading into the city for a dinner. The writers disembark in town and the woman hops out of her car goes around to the back, pulls out a bottle of 2017 Rosso and 2013 Brunello, hands them to the writers and thanks them (only in Italy right?) … Wait the story gets better, the writers were on their way to a tasting in town, but upon arrival found the tasting had either ended or never began (it's Italy, everything’s in flux) - they look at one another and the two bottles they are carrying and decide to head back and see if they can taste the wines with the producer so they can leave a little more about her winery … and of course, taste the wines.

Upon arrival back of the restaurant / Enoteca, where they were dropped off, they meet up with the producer and her 12 year old daughter who acts as interpreter: Clara Monaco (the winemaker/owner/nurse) and her daughter Elena begin to tell the story of Corte dei Venti - a farm established in 1943 as Pian Cornello now into its third generation (Elena will be the 4th). From 1943 to 1970 they were primarily a pig and sheep farm and in 1970 they planted and began growing grapes. In 1990 they produce their first Brunello, and in 2010 Clara's father split the farm equally between his children.

Clara taking the Corte dei Venti part and created her first Brunello under that label from the 2007 vintage. Their production is about 22,000 bottles with a top capacity of about 35,000 - the reserve she makes is truly “limited” to a mere 1,200 bottles top production in the best years and is called Donna Elena, after her daughter. Rosso is a 6000 bottle production, Brunello about 4,200 bottles and Silvana, super Tuscan blend, makes up about 4,000 bottles.

We taste the two wines that were presented to us, and within the confines of the enoteca they find the Silvana, which is also opened and tasted ... The writers have an engagement to get to, but are persuaded to stay longer and longer and are even invited to remain for the dinner with half a dozen Italian journalists and the winery’s Texas-based distributor and his wife.

Over a dinner that started with 2011 Belle Epoque (Champagne) they taste through the wines and eat possibly some of the best food of their week-long excursion - and experience true Italian generosity, conviviality and friendship - while they end the night still unable to say a word to one another they have the bond of a wonderful evening spent over food, wine and friendship in the centre of Montalcino. 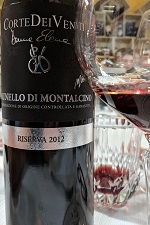 And although the evening at the Enoteca is far from over, Clara persuades her husband to drive the writers back to their hotel, dropping them off where she found them. In the movies this would be a dream you'd wake up from, but these are unscripted moments that life hands you - people now say “wine brings people together” I can tell them this story as proof.