Newsletter #280 - Let's Not Get Involved

WineReview:  Let's Not Get Involved, a Commentary

In the immortal words of the late Joan Rivers, “Can we talk?”.And I mean seriously and bluntly:  In this world there are people I have very little sympathy for, this article is about one such person …

There seems to be a problem in Niagara, and it has to do with the selling off of our natural resources – I’m not talking about hydro-electricity or water, I’m talking grapes, grapevines and wineries.

This little bit of jingoistic rage springs from a CBC article from May 20: “BC winery owners facing life in Chinese prison for alleged smuggling” (read here) … wherein we learn about both John Chang and his wife, Allison Lu, who are sitting in China (one in jail the other without passport) awaiting their day in court for under-reporting the value of the goods they were exporting back to China (what the Chinese call “smuggling”), mainly in the form of Icewine, from their LuLu Island Winery in British Columbia; I am also sure this would have included Ontario’s former gem, Lailey, which Chang acquired in 2015, had they been able to get the winery running before Mr. Chang’s arrest in March 2016.

The wine in question (Icewine) was being valued at 10 Yuan, or about $2 Canadian, and as everybody knows, real Icewine is much more than $2 a bottle, and that “everybody” includes the Chinese government … So Mr. Chang has been defrauding the Chinese government of their rightful tax revenue – plain and simple.  The article also goes on to say that other “foreign winery [principals] were similarly charged” around the time of Mr. Chang, but admitted to the under-reporting and paid fines – whereas Mr. Chang maintain he’s innocent.  Let’s be honest, if there is a paper-trail of undervalued Icewine, and I am sure there is, then I believe (and I am not a lawyer), that John Chang has no leg to stand on.  One report I read said that Mr. Chang claims he followed all the rules as he understood them, though I am pretty sure the rules don’t say under-valuing the good you are bringing in by a sizeable margin is okay.

While I am sympathetic to a daughter (Amy Chang) trying to free her parents, this really is an open and shut case of fraud, and not a “trade dispute” as some are trying to make us believe; I am having a real problem wrapping my head around the people lining up wanting the Canadian government to step in to help free Mr. Chang.  And I find myself asking, would we want China to step in if we (the Canadian people) were being defrauded out of millions of dollars in tax revenue (in this case 20 million) while an individual gets rich besmirching our good name and plunders a natural resource in the process.  I think we should leave this matter alone, obviously Mr. Chang has made a pile of money through this Icewine scheme, enough to find it lucrative enough to cross the country and buy Lailey in the hopes of setting up a similar operation to what he had on the west coast … and here’s the kicker, rumours have long been floated about what Mr. Chang was doing long before he was finally caught. You can’t, according to the LuLu Island website (and the CBC article) “account for almost 20 per cent of all Canadian wine exported to China” and not be under some kind of scrutiny, sooner or later if you are doing something illegal for long enough it will be found out … and that is what happened here; and so too were the other winery operators who decided to follow in Chang’s ill-advised and fraudulent footsteps.

Sure Canadian are known for their kind hearts and warm spirits, but is this really the guy we want to stand behind and start a diplomatic issue over with the Chinese government?  As far as I’m concerned you can let Mr. Chang sit in jail for attempting to misrepresent one of our national treasures and lining his pockets in the process.

Addendums … The trial was set for May 26, and Mr. Chang owed in excess of $20 million in back taxes, according to some reports.  As of today, I still cannot find the outcome of the trial – though a government briefing paper on the matter said conviction rate in China for criminal offenses is nearly 100%.

Winery in Trouble … I have it from multiple sources that the days of Coyote’s Run as we know it may be numbered – after their sale last year things have not been on the up-and-up; and just last month the rumour mill began to churn that David Sheppard is leaving to join the team at Flat Rock Cellars (that rumour has since been confirmed) … this is a huge blow for Coyote’s Run, but a real coup for Flat Rock.  Sheppard has been the winemaker at Coyote’s Run since they opened.  In truth I could see the writing on the wall at Cuvee this year: I tried one of Dave’s recent Chardonnays and was appalled that it did not have any of the hallmarks of a Sheppard Chardonnay, in fact it was downright bland and uninspired (and this was supposed to represent the best the Coyote had to offer).  It’s sad to see the slow demise of yet another Niagara gem (a la Lailey and Marynissen).

Adamo 2014 Pinot Noir, Lowrey Vineyard - $34.75 (W)
www.adamoestate.com
Adamo is the winery attached to Hockley Valley Resort, and the winemaking has been taken over by Shauna White (once of Ravine in Niagara-on-the-Lake).  She has acquired some primo and coveted Lowrey Vineyard fruit from Niagara-on-the-Lake, aged it 12-14 months in French oak (20% new) and has crafted a nicely layered wine that starts with cherry, raspberry, and cranberry then finishes with delicate spice (a la white pepper) … for a winery in the middle of nowhere it’s winemaking like this that will make it somewhere to visit.  Rating: ****

Featherstone 2015 Cabernet Franc - $19.95 (W, L)
www.featherstonewinery.ca
The ‘Stone continues to make some of the best, and best value, Cabernet Franc in Niagara – The colour comes from skin contact for 21 days and that lovely sweetness of fruit comes, not only from the year the grapes were grown, but also the American oak used to age the wine.  Ripe raspberry, cherry and tobacco hit the nose and are followed up on the palate adding hints of smoke through to the finish … Layers of flavours and ready to drink, but age-able as well, say 5-7 years easy.  Rating: ****+

Fielding 2015 Cabernet Franc - $21.95 (W)
www.fieldingwines.com
Richie Roberts is drinking the Niagara Kool-Aid and I’m loving what he is producing over at Fielding, year after year he gets better at his craft and Fielding is the recipient of this knowledge.  This Franc comes from the “short-crop” but still excellent vintage of 2015, aged 1 year in neutral oak just to give the wine some polish; because I’m sure the ripe fruit already gave the finesse.  Pretty floral and tobacco aromas followed by black cherry, cassis and pepper with a red licorice finish … silky mouthfeel is derived with a little time in glass, so make sure it’s a big one.  You’ll be enjoying this one for 7+ years to come.  Rating: ****+

KEW Vineyards 2012 Tradition, Sparkling Wine- $29.95 (W)
www.kewvineyards.com
On the website they tout themselves as “the hidden gem” and if you are a sparkling wine fan that moniker hits the nail right on the head.  This “Tradition” blends Pinot Meunier, Pinot Noir and Chardonnay with 4 years on lees, and yet it still retains such a vibrancy on both the nose and palate: bready, biscuit and bubbly – the big B’s of sparkling wine – there’s even hints of mineral, apple and lemon with crisp acidity and a finish that will have you coming back for more just to experience it all again.  Rating: ****+

Malivoire 2016 Gamay, Small Lot - $19.95 (W)
www.malivoire.com
Look, you already know I love Gamay so that should come as no surprise, but my love of Gamay gets enhanced when I taste the gems coming out the door of Malivoire – it is on the basis of Gamays alone I would have given Shiraz Mottiar the winemaker of the year award (which he won at this year’s Ontario Wine Awards).  After spending a mere 6 months in barrel the nose is full-on cherry (makes you wonder what it would be like without the barrel time) and it just pops right out of the glass and down your olfactories; the palate is simple yet elegant with red licorice mixing it up with red and black cherry fruit. Can’t wait to dig into a few bottles of this over the summer.  Rating: ****+

Meldville 2016 Sauvignon Blanc, “Second Edition” - $20.00 (W)
www.meldvillewines.com
The release of this second edition Sauvignon Blanc from the former winemaker of Lailey, Derek Barnett, is right around the corner and it may be his best yet (and I’m including what he made at Lailey).  20% barrel ferment and 3 months in wood, with the remaining 80% going into stainless and resting on lees for 4 months, and don’t forget the 2 harvests: one for acidity, the other for flavour.  This wine has lovely tropical notes with grassy elements and good texture in the mouth that seems to deliver a little peppery goodness on the finish. The acidity helps prolong the length in the mouth – I’ll give it the same score as the 2015 but this one is just a touch better.  Rating: ****+ 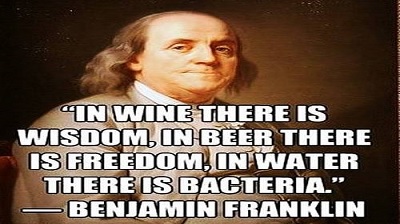 The Weekly Wine Video Series: A Recap of the Latest Videos

From the Cellar (blog)
When it’s not an Ontario wine, here’s what I’m pulling out of the cellar
New Posts Added

PODCAST:  Two Guys Talking Wine ... NOW WEEKLY
Join me and my co-host Andre Proulx as we discuss all things wine, and sometimes we're not afraid to go off topic
Episode 44 Talkin' County in the City
Episode 43: Talkin' California Wines
Episode 42: Talkin' to Matt Mitchell of Marisco
Episode 41: Talkin' at Cuvee 2017

OntarioWineReview’s bi-weekly newsletter is devoted to the love, enjoyment and promotion of the wines of Ontario and the wineries that make them.

What can the Grape Guy do for you … Michael Pinkus (Grape Guy) provides a variety of wine related services that you might be interested in taking advantage of:  he gives lectures, leads seminars, conducts tastings, sets up tours; consults, selects and judges.  He also gives interviews, broadcasts, podcasts and writes.  Contact the Grape Guy if you require any of these services or have any questions.

Psst, Pass It On … keep the good wine flowing. Forward this newsletter to your mom in Milton, your son in Smith Falls, or any other family member or loved one that you know needs good wine advice.

Socially Speaking …
Follow Michael Pinkus, the Grape Guy’s (almost) daily Tweets at http://twitter.com/TheGrapeGuy .
You can become a friend on facebook: http://www.facebook.com/?ref=home#!/mepinkus .
Those who are “Linked In” can find Michael at http://ca.linkedin.com/pub/michael-pinkus/14/704/4b8 .

To contact us with feedback, article ideas, comments, concerns or questions – email This email address is being protected from spambots. You need JavaScript enabled to view it. We look forward to hearing from you!

© MichaelPinkusWineReview.com 2017. All rights reserved. You may use the content of this newsletter by including full credit to Michael Pinkus, Grape Guy and a link to www.michaelpinkuswinereview.com