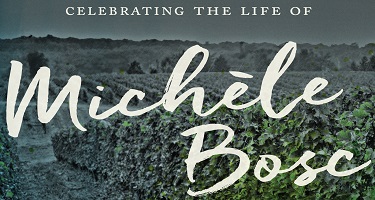 I attended the celebration of life in the capacity of Michele’s friend, and originally did not feel compelled to write anything about it: it was a private function and I wanted to respect the family’s wishes – but with Paul Bosc Jr’s permission I decided there was still something left to say; I also knew I had to write something when I awoke in the middle of the night, the day after, with details and tidbits of sentences running around my head … [ed. note. for those of you who wake up that way you know you’d better start jotting things down or you’ll lose them by morning].  What follows are a few personal notes, takeaways and thoughts – plus the initiatives embarked on by both Chateau des Charmes, and Paul Bosc Jr personally, in an endeavor to make Michele’s lasting legacy and premature passing meaningful.

On a rainy, chilly Mother’s Day Sunday with 10 degrees and grey skies forecasted all day, it seemed only fitting that about 200 invited guests attended a private event at Chateau des Charmes to honour and celebrate the life of Michele Bosc, passed suddenly January 10, 2019.

Today was not about mourning, but instead it was about remembering the life of a person who touched all of us in that room, in one way or another. It started with Wish You Were Here by Pink Floyd and ended some two-and-a-half hours later with Simple Man by Lynyrd Skynyrd, and in between we learned about Michele Bosc’s life from her mother, friends, brother and most of all through her bereft husband Paul Bosc Jr. Through the laughter and many tears, we learned about all the way Michele touched so many people’s lives in a thoughtful, helpful and meaningful manner, and through the initiatives announced on this very day, how she will continue to touch and make a difference in many more people’s lives; the sad part is that, unlike all of us present, those new people will never get to meet the woman who made it possible.

The patio, upon which the event was held and where so many (including myself) got married  and will continue to do so, has been dedicated to Michele and officially named “Michele’s Courtyard”,  to recognize her tireless work at turning the Chateau into a destination for weddings and other events – to commemorate this naming a flush to the ground engraved special, local piece of limestone has been embedded in the ground at the entrance for all to see … there will also be a monument to her placed in the adjoining rose garden, though this is a future planned project, as they are looking for an appropriate piece.

Starting with the 2018 vintages of Aligote and Pinot Noir, and going forward, these wines will be underscored as “Cuvee Michele”, two of Michele’s favourite grapes that the Chateau makes wine from. The Chateau will also be a donating a dollar from each bottle sold to the Camp Kerry Society, allowing three families, one from each province in which they operate (BC, Ontario and Newfoundland), to attend this very special place.

But Michele’s legacy doesn’t stop at the Chateau’s doors, it continues on outside as well, through other initiatives announced by Paul Bosc Jr.

Along with the donation to Camp Kerry a room dedication at the new Wellspring Niagara facility called the Michele Bosc Energy Therapy Room (this was a private donation made by Paul Bosc Jr and his son) was announced. 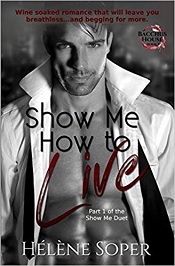 And here was the one that came as a surprise to many of us, Michele wrote a romance novel, as it was revealed, her favourite genre, which was published just before her passing. Paul described it as “salacious” and said he had no idea his wife’s mind worked like that, he also succinctly encapsulated the plot line and the location (set in Niagara wine country), though he was quick to point out the protagonist, the President of a wine company, was not him and jokingly wondered aloud who in the room it might be. The nom de plume Michele used was Helene Sopre and the name of the book is “Show Me How To Live of which .50 cents of each book was to be donated to Gillian’s Place a partnership that Michele set up before the book was even published, since Michele’s passing Paul decided to donate 100% of the proceeds. The book seems to be only available through Amazon, if you wish to get a copy follow these links CDN | USA

Those who know me and my writing practices, know this tidbit, when I write I always start with paper and pen – I don’t feel comfortable using the keyboard straight away until I have all my thoughts written down (in long form) on sheets of paper …. So I found it kinda weird, maybe a little ironic, and sort of spooky to realize the following: As I sit here and write this initial draft about the late Michele Bosc I am using a pen given to me by the late Lloyd Thistle (known to many as the Schott Zwiesel man) – I introduced Lloyd to Michele many years back and Michele became a proponent of Schott Zwiesel stemware, as well as one of the few wineries (and the first) to use the stem exclusively in their tasting room. I miss both my friends … wherever they are now I hope they are re-connecting over a bottle of wine in a good glass. Cheers to you both.

You can read my previous thoughts on the passing of Michele Bosc here.