Report from: Looking Back at Don Melchor 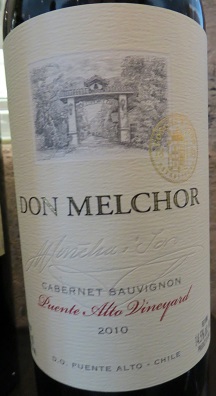 Their wines are in 147 markets, 70% of their production gets exported; they have 30% of their domestic market and make up 35% of Chilean exports.  They have 10,750 acres planted, which is second largest and between the years 2011-2013 Drink International named them the #1 most admired wine brand in the world.

Chile is the perfect place to grow grapes and is one of only 2 countries free of phylloxera ... So why is Chile so perfect? Because of 4 natural barriers: the desert in the north, the Pacific to the west, Antarctic to the south and the Andes Mountains in the east.

So what brings them to Toronto on this fine April day? ...