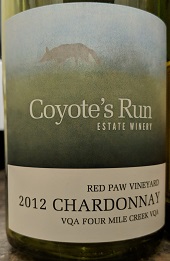 (November 9, 2018) ... Depending on the week we have had will depend on what we plan to do after our bottle of bubbles on Sparkling Wine Friday - a tradition in our house for the last two or three years. This week I pulled out a couple of Chardonnays and the one I thought would be great was not, and the one I thought would be shot and over the hill was far from initial assessment ... in fact it was ... well, great. For those who saw the post that night on Facebook here's what happened:

Coyote's Run 2012 Red Paw Chardonnay ... I had such high hopes for this wine and they were shot down in flames quickly and continuously, the more I came back hoping the wine would open the more my hopes were dashed - the best things, the BEST thing, we could say about this wine was ... "dirty diaper" and that's far from appealing. 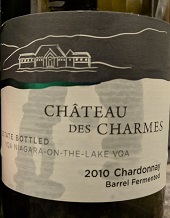 Chateau des Charmed 2010 Barrel Fermented Chardonnay ... We opened a second bottle of something different and were ready to toss this one out as well based on aroma alone, but then the taste won us back over (as a wine writer you learn to taste every wine, no matter what the smell) - vanilla, coconut, canned peaches and preserved pears all with a medium length finish, it certainly was better than the Coyote - at least it was drinkable, the smell let us down (for the better part of the evening) but the palate was so much better.