(December 16, 2018) ... I can't believe it' been almost a year since Larry and I sat down with some questionable Ontario wines and gave them a taste, we need to get to these wines more often. Anyway, tonight I opened another 15 wines and below are the notes we took during the tasting - some bad (many bad) but also some real highlights in this line-up:

Coyote's Run 2010 Red Paw Chardonnay ... I know I had tried this wine in the past 6 months but I really wanted my underwhelming bottle to have been a fluke - sadly it was not: the vanilla, caramel, baked apple could not seem to break through the borderline oxidation that was occurring; it was creamy but really uneventful.  (original review can be found here)

Coyote's Run 2010 Black Paw Chardonnay ... Spiced-apple, caramel, lime meringue, it was better than the Red Paw but it died incredibly quickly so it was a NO from me (and Larry, who usually digs on borderline Chardonnay agreed).  (original review can be found here) 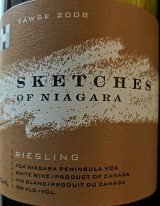 Norman Hardie 2007 Riesling ... a controversial wine to try but it was in the box so we had to crack the cap: it had a partial oily texture with lime zest, lime pith notes and full on gasoline aromas and flavours; "this emperor has no clothes" as Larry said, there is a very off-colour joke to be made here, but neither of us said anything else.  (original review can be found here)

Tawse 2008 Sketches of Niagara Riesling ... only 10% alcohol so it had a nice bit of sweetness along with some pear and apple notes along with enough acidity to keep it balanced - best white wine of the tasting.  (original review can be found here)

Cave Spring 2006 Dolomite Riesling ... Caramelized colour and nose with hints of mineral, bruised apple and burnt brown sugar; the flavour is a little bit funny and it all dies within an hour, sadly it was not exciting at all.  (original review can be found here) 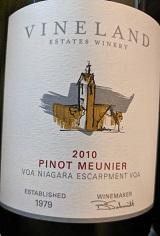 Vineland 2010 Pinot Meunier ... This has some great Pinot Noir character, it was light in colour, had good acid backbone plus some sour cherry, cranberry and it all culminates with medium length finish - "the wow-factor is that it is still drinkable", and it was tasty.  (original review can be found here)

Erie Shore 2007 Zweigelt ... This one was stinky, the acidity was huge (and hugely unappealing) and there was also sour red fruit at it's core - it's nothing but acid and sourness - not good.  (original review can be found here) 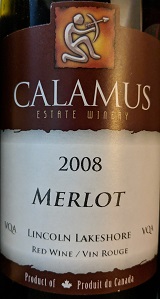 Calamus 2008 Merlot ... This one pours thin, looks more like Pinot Noir than it does Merlot, and it also drinks thin - 2008 was a pour year but the palate real does show some interesting notes: red and black fruit, good acidity, hints of cassis on the finish and even has some gentle spiciness - it's still quite drinkable despite the initial assessments.  (original review can be found here)

100 Marks 2010 ... No notice on the bottle as to what this might be, I texted with winemaker Jeff Hundertmark that night and found out it was primarily Pinot Noir with some Gamay; but no matter how we tried to drink it there was nothing worthwhile in the bottle: boring and sour, dry and uneventful; this wine was little more than a red - it was supremely boring, not dead, just boring.  (no original review)

Exultet 2010 The Blessed Chardonnay ... "What the hell am I drinking?" This wine popped up unexpectedly during the tasting and we were excited to taste this Gold Medal winning wine from the Ontario Wine Awards ... but what a disaster: very oaky with a hint of sourness and lack of fruit, the sweet oak took over with loads of vanilla, it tasted more like a vanilla dessert wine than a dry Chardonnay and the acidity was lacking as well, one of us said "it had flat lined" and not even the nurse in the room could help bring it back to life; and that nurse loves Chardonnay ... but not this one.  (original review can be found here) 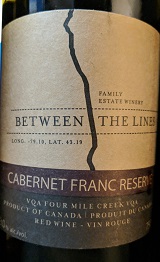 Between the Lines 2009 Cabernet Franc Reserve ... We speculated that this has got to be the first or second vintage for this winery and it shows great promise for the future ageing of their wines: smoky, oaky, tobacco and dried dark fruit; this one is on the edge, but it's on the right side of the edge, so we were super impressed - good flavour for it's age.  (original review can be found here)

Colio 2007 Cabernet Franc Reserve ... What a total and utter disappointment this wine was: 2007 was a hot vintage, and while you could see there was a fruit core at one point, but the pruny and oxidative notes that wafted up from the glass killed off anything else that might be positive about this wine - and wouldn't you know it, it was sealed with a plastic cork - I thought we were over that by 2007 but sadly the folks at Colio had other plans and ways to ruin their wines.  (original review can be found here)

Southbrook 2007 Triomphe Cabernet-Merlot ... Over the course of dinner in early-December we opened some beauty single varieties from Southbrook, wines that dated back to the 1998 & 1999 vintages - it was a good thing this 2007 was not one of them:  sour fruit ruled the day here "nothing in the way of redeeming features": bad smell and plenty of baked and cooked fruit notes - some call it maderized, I call it un-drinkable.  (no original review)

Fielding 2007 Chosen Few ... Helllo! This was my wine of the tasting: smoky, mocha, bittersweet chocolate, leather, white pepper all backed with acidity and hints of blue fruit; the tannins were still robust if not a little over-powering with a mocha-black fruit finish. I think the tannins aren't going anywhere so I think this is the time to drink it or it will be lost ... so I drank it quite happily the rest of the evening.  (original review can be found here)

Norman Hardie 2011 Pinot Noir, Niagara ... okay, so I found another controversial wine on the table and while it was a very guilty pleasure it was a good wine to drink especially for those in the room that love Pinot Noir: it had a sweetness of red fruit, some white pepper, strawberry, cranberry and even some balsamic notes - look this does not excuse what he did but I do have some of his wines in the cellar and I have to do something with them ... I have to finish them up because I will not be reviewing anything new from him, and they were too expensive to pour down the sink.  (original review can be found here)