Just because I started a website called OntarioWineReview.com doesn't mean it's All-Ontario-All-the-Time. When I kick back at night my mood (and sometimes my curiosity) decides my wine of choice. And the title should read, "Uncorked and Un-Screwed Tonight" ... but that just sounds wrong. 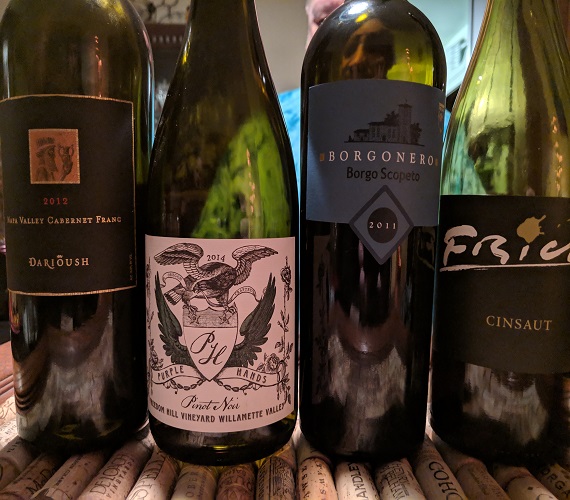 (December 21, 2018) ... This is becoming my annual dinner with Dave at Christmas ... He pulls out some interesting stuff from the cellar and I fawn over what he brings top-side ... In truth, I don't think he has brought out all gems over 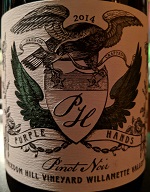 the years, but his duds have been few and far between, this is the 2018 line-up of wines, you'll notice a very American theme about the wines this year and he hits four consecutive years ...

Frick 2015 Cinsaut (California) ... Plum and blackberry with hints of vanilla, and white pepper on the nose - the palate was not as expressive with its blueberry, new leather and some tannin bite backing that never seemed to let go.

Purple Hands 2014 Pinot Noir, Freedom Hill Vineyard (Oregon) ... lots of spice, pepper and red licorice on the nose while the palate was more subtle about things with its spiced cherry, cassis, red currant and smoke; but what really stood out here was that spice, tons of spice ... but all-in-all this wine was very drinkable. 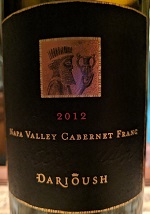 Darioush 2012 Cabernet Franc (California) ... Straight Cab Franc is not what I expect from California wineries best known for their Sauvignon, and when alcohols get up above 14.5 it's not really what you expect from Franc either. This was a tasty little number, but that 14.8% alcohol gets into the nose so much you can feel its boots on your chin (so to speak), but there is also some cigar box, dark plum, and spiced-raspberry whiffs that become apparent once you get past the booze.  It had a juicy start with a real peppery finish. This one if still just a baby and should age nicely - here's hoping it will integrate that alcohol.

Keplinger 2013 Sumo (California) ... it's a red blend dominated by Petite Sirah (76%) with Syrah and Viognier (4%) taking up the rest - it too had a big alcohol wollop (14.9%) and a big coffee nose that never relinquished its hold - but it also had some notes of barnyard, fresh hay and manure that not even aeration could shake from its stranglehold ... definitely not my favourite on this night. 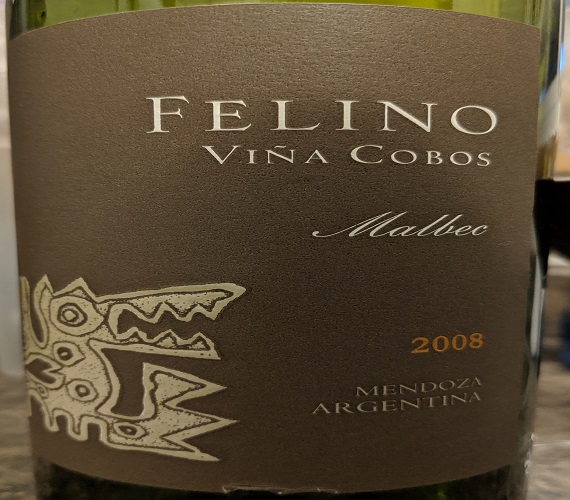 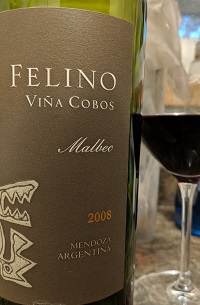 (June 15, 2019) ... My podcast partner, Andre, has been going ga-ga over Paul Hobbs' California wines and I stumbled across this in my cellar (beside a bottle of the Cabernet Sauvignon - same winery, same year - to be reviewed later) and thought, "let's see how this wine is doing?"

For those wondering the connection, Paul Hobbs project in Argentina is called Vina Cobos and Felino is the entry level for the brand, whose wines can get up into the stratosphere of pricing. The opening and initial pour goes very well as subtle, but flavourful, aromas whaft out of the glass - first sip is one of those soft and easy sips that proves this wine still has something to say:

Aromas of mocha, cassis, blackberry, and white pepper continue to swirl around, not all at once but with each sniff something else is revealed ... the acidity proves to be good and balanced without getting in the way ... on the palate there's dark berry fruit and plenty of spice; about an hour in there appears to be a good balance here, but the spice just might be getting in the way a bit. Another 40 minutes pass and that spice has settle down allowing a more balanced note of spiced-blueberry to take over on the finish.